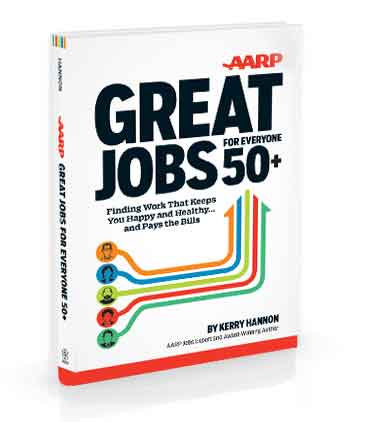 When it comes to understanding how people plan for and think about working past age 65, you’d be hard-pressed to find someone more knowledgeable than Kerry Hannon

. Not only is Hannon a career transition expert andAARP’s

job expert, she’s also the award-winning author of the national bestseller Great Jobs for Everyone 50+: Finding Work That Keeps Your Happy and Healthy…And Pays the Bills

With 54 percent of Americans saying they’ll continue to work after age 65, many people are starting to think about these later years as “Adulthood #2,” Hannon tells Straight Talk. That means finding a new job – and sometimes an entirely new career path – that can offer both financial and emotional rewards.

and talking with retirees across the country, Hannon found herself inspired by stories of people who rediscovered themselves during their retirement years through new careers, rather than long afternoons on the golf course.

Hannon points out that the need to work during retirement is often about more than looking for extra money to round out Social Security or other retirement savings; often it’s about getting out of the house and finding a meaningful way to pass the time.

“You may be retired at 60 or 65, but you still have 15 years ahead of you to do something extraordinary,” Hannon says.

Working until age 80 may have sounded crazy, say, 40 years ago, but longer life spans are changing the retirement game.

For those who reach 65 and enjoy above-average health, the likelihood that they’ll live to 85 becomes even higher: 50 percent for men, 62 percent for women, and 81 percent for at least one half of a married couple. And mortality rates continue to improve each year.

So what advice does Hannon offer to those looking for a new career during retirement?

“I try very hard to find a way to inspire people to pick up their heads and look around,” Hannon says. “Do some soul searching. What are the things you’re happy doing? Think back to your childhood, before you got on this path where money ruled everything.”

Work with jerks? Author explores how to deal with toxic coworkers

The one investment you need now to weather inflation